Today is May 28th, and as promised, the alternator is waiting for me at OK Tire and Auto. My short stay in Smithers was perfect for getting some housekeeping items done. Laundry, minor repairs and trips to Canadian Tire for pieces and parts I’ve discovered would be handy to have on the road.

One nagging item I was able to address here involved my XM Satellite Radio antenna. As you k 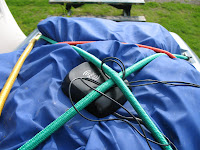 now by now this trip is about heading due north to the top of the world. This presents a problem for the XM signal because of where my XM antenna is mounted (inside on the dashboard). Whenever I’m pointed north the signal from the satellite gets blocked by Stella’s metal roof, my cargo rack, spare tire and mountain bike. This would only be mildly irritating; except for the fact that every time the signal cuts out I’m subjected to the unfiltered sounds of Pete Unplugged. This is unacceptable. So I grabbed a roll of duct tape, fished out the coil of antenna wire that was buried in the dash, and ran the antenna out the passenger door to the roof. With the antenna securely tied down with bungee cords I now have a clear, uninterrupted, digital signal. It’s hard to rough it in a Westy.

On to Stella’s repair work. I had just enough juice in the battery for one start, which got me from Riverside Park to the auto shop. 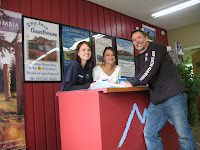 So, with Stella being cared for by John and the OK crew, I walked down to the Smithers Chamber of Commerce to get some maps with a little more detail than my trusty AAA maps. Since the next few stops involved a little off roading, I thought it would be nice to know where the hell I was going. Ali and Erica gave me a suitcase full of information and even checked into some road conditions for me online. Much appreciated, ladies!

With Stella running like a well oiled machine, and the day getting late, it was time to continue the northern trek. As I say goodbye to Smithers, and to B.C. over the next few days, let me also say thank you. It was a place filled with natural beauty and a whole lot of very cool people, eh?

Chased by a grizzly…

Let me begin by saying, “I am not making this up.” It was a relatively short drive from Smithers to Terrace, and I soon found myself in the heart of the Nisga’a Memorial Lava Bed Park. Within minutes of entering the park I finally had my first bear encounter. Sort of. All along the road I saw Spirit Bear after Spirit Bear (black ones) feeding after the long winter’s hibernation. Naturally I pulled over, grabbed my camera and watched each of them quickly run for cover as I tried to focus. Damn! I owe people pictures! And these bears couldn’t care less! It was getting later by the minute, so I decided to move on and hope for the best. Even though I had daylight until after 11:00 PM, I got a very late start out of Smithers and it was starting to rain.

The drive through the lava beds was amazing, and before I knew it I hit the junction at the northern end of the park. The sign said New Aiyansh right and Laxgalts’ap left. Since my maps were buried somewhere on the passenger seat, I thought I would go from memory and gamble with the one I couldn’t pronounce. I went left. This turned out to be a very exciting mistake.

I’m now on route 113 heading due west to the Pacific Ocean. I learned this about 40 miles down the road when I noticed a body of water the size of a very large lake flowing west. I said, “Wait a minute. Lakes don’t flow. Do they?” Turns out I was enjoying a nice leisurely drive in the pouring rain going in the wrong direction watching the tide empty out of the Portland Inlet. Oops. Had I not noticed this I would have eventually ended up at another place I couldn’t pronounce; Gingolx.

I turned around quickly to try to make up some of the lost time. I still had no idea where I was sleeping this night. As I headed back with the Portland Inlet now on my right I saw three bears down from the road on a grassy stretch leading to the water. Remember, I was still hurting for pictures. I slowed down to get a better look, but by the time Stella rolled to a stop I found myself hastily slamming her back into gear. One of the bears, that was 100 feet away just seconds ago, was now closing in on the Westy. You guessed it - it was the mama bear. The other two were her cubs. Really cute, but I was too busy peeing my pants to get a good look. Now mind you, this was not a mama Kermode Bear, the kind that runs for the hills when they hear your car approaching. I was about to come almost face to face with my first grizzly bear.

Anyway, we’ve all heard the stories. The stories are true. The grizzly charged toward the Westy, just as I slammed it into first gear. I will never forget the scene in the rearview mirror as this 800 lb Terminator bounded after me. Incredible. I don’t want to be overly dramatic here, but if I was outside my vehicle I would be writing this from the hospital. So what’s the take away here? It's simple. Never drive that deep into grizzly territory without wearing a diaper.

An apparition of a ghost of a white Spirit Bear…

After my forty mile drive back to the junction, I thought it would be a good idea to determine what was coming up for campgrounds. Even with over two hours of relative daylight left, I didn’t want to be out here on a dark rainy night. There was nothing in New Aiyansh. Next stop Nass Camp. You’d think a town name with the word camp in it would be able to put you up for the night. Not so. The next “for sure” campground was at Meziadin Lake, 120 miles away. The only problem with this was the first 30 miles was down an unmaintained forest road. You know they’re serious when they come right out and basically tell you, with a road sign, that you’re on your own. I decided to press on and make forward progress. There was no other way to Meziadin Lake that didn’t involve backtracking over 100 miles to Terrace.

So off I set into the rainy darkness. I’ve wished many times along the way that my girlfriend, Cat, could have been by my side on this trip. This is one time when I was glad she was safe at home, holding down the fort! The road was gnarly from the start and my speed was averaging 15 miles per hour. Great, that’s two hours before I see pavement again. I pressed on into what had become rain mixed with snow mixed with a ghostlike ground fog. As my fatigue grew imaginary figures began appearing in the ground fog that began to look more and more like white spirit bears. Suffice it to say it had been a long day. So I drove on, crying like a little girl, hunched over the steering wheel straining to see the next cavernous pothole. The good news? Well, around the time I stopped crying, I magically popped out onto 37 north and made a beeline for Meziadin Lake. I pulled into yet another clean, quiet and virtually empty B.C. campground just before 2 AM, parked the Westy, had a cold beer for dinner and fell fast asleep.

Hyder was one of Wolfgang’s many recommendations of must see sites in British Columbia. While technically not in B.C. it's considered somewhat of a sister city to Stewart. What few children there are in Hyder actually attend school in Stewart.

After sleeping in until almost 11:00 AM back at Meziadin Lake, I hit the road for the fairly short drive down Highway 37A to Stewart. As I approached the border I saw the Canadian Border Agent Facility and made a mental note to bear to the right and check in with them on my way back.

Now I focused my attention on getting my passport together for the U.S. Border Agents. As I got closer to the border I looked left, ri 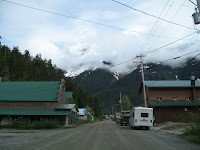 ght and straight ahead. “Where are these guys hiding,” I asked myself. I went a little further and then realized there were no U.S. Border Agents. Cool. No hippie questions. I passed right through and found myself on Main Street, in downtown Hyder, amongst the hustle and bustle you’d find in any virtual ghost town.

The next step was to find some fruit, or at least some orange juice, to treat a mild case of scurvy that had developed. As I walked up to the Hyder General Store, I passed two gentlemen that were clearly throwbacks from the Klondike gold rush days. I said good morning to both of them and was rewarded with a cold stare. They had a disposition that had nothing to do with lack of coffee or the rain. Great. They must have seen the California plates. As I left the store, the shorter, more bitter looking of the two, yelled, “Hey!” I turned slowly, wondering what was coming next. He asked, “What year is your Westy?” I told him 1987. He said he had an ’83 and an ’85 Westy, both with over 300,000 miles on them. I told him to hang on to them; they last forever. A little Westfalia goodwill, even in a ghost town. Happens to me all the time.

see. The shop keep at the general store said I wouldn’t be able to make it all the way to Salmon Glacier, but there was a smaller one about 10 miles up the road. I was hungry to see my first gl 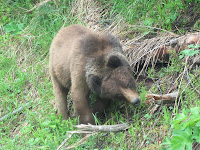 acier, and he assured me that even a partial drive up the road was worth the trip. He was right. All along the road I saw Kermodes feeding, and got to see a small, no name glacier. Hey, come on, it was my first one! But the highlight of the side trip to Hyder was getting to capture some close up pictures of a grizzly. This was not the first one I saw, but hopefully you remember why I didn’t get any pictures of that one!

At this point the mission was to get to the Yukon ASAP. However, it was still several hundred miles away, the

weather was still on and off and the roads were no more familiar. I set my sites on Kinaskan Lake, which I shared with one other camper. It was damn cold but there was no noise, no mosquitoes and I had a nice spot right at the lake edge. And, of course, a clear XM signal to listen to the Lakers spank the poor Nuggets to win the West. Maybe next year Denver.