I'm back in San Diego, and aside from the millions of people I now share the road with, it's great to be home! The last leg of the trip was an amazing week in Banff, Jasper and Yoho National Parks that I shared with a friend from San Diego. Here's some of the happenings from the week. Sorry. Not a single bear.

Banff was a short 90 minute drive west of Calgary and my city dweller friend was anxious to see what Westy wilderness living was all about. To her credit her learning curve was about one hour. She jumped in with a great attitude despite temperatures that dipped a little below what we both expected. In fact, she was so chilled on the first night she attempted to light her shoes on fire. While she continued to learn the finer points of gathering around the campfire, I went to work repairing the shoe meltdown. Moving forward we came up with a solution to her slowly freezing feet that did not involve a Shoe Bomber impersonation. She went to bed each night with four layers on her feet - plastic trash bags as layer one and three layers of wool socks. The result? A happy camper.

Fishing was low on the priority list after my previous grayling successes, so we focused on hiking the Canadian Rockies. We actually saw more glaciers and ice fields on this part of the trip

than I had seen in all of Alaska. This was due mostly to weather that cooperated for most of the week. We did have some rain, but as was the case during the Alaskan monsoon season I went through, the natural beauty trumped the rain. 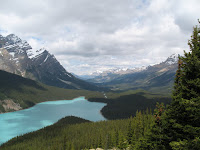 campground was better than the last. Kicking Horse was a great place to spend our last night in the Rockies. We had the usual cord of free firewood (spoiled for life), camped on the river, had clean bathrooms with hot showers a short walk away, and we even had power in the bathroom to plug in the percolator the next morning.

We left Kicking Horse early planning on doing laundry in Calgary and going to a nice Thai lunch. Well, we didn't get to the laundry, we didn't do Thai, and truth be told, we were damn lucky to get to the airport on time. I had seen a lot of construction delays during the journey, but any time I approached a flagman the wait was never longer than five minutes. So I wasn't concerned when we stopped on Highway 1 east to Banff. Five minutes went by. I turned the key off. Ten minutes went by. I checked the oil and organized some gear in the back. We continued to wait. After a solid thirty minutes I mentioned that I had never waited this long. We soon found out what the problem was. A guy in a van about five cars ahead made a U-turn and drove directly toward Stella and informed us that there was a serious accident miles ahead and the wait would likely be 4 or 5 hours (he was a retired cop and must have had a police radio). How did he happen to pick us? We would have sat there forever without his most welcome heads up. As we talked about the karmic forces at work, I turned around and followed our new best friend to the Box Canyon Parkway, which turned out to be a secret alternate route to Calgary via Banff. We still have no idea how he picked us out of hundreds of frustrated motorists, but we're not complaining. It did feel a little weird turning around, looking at the other drivers, and knowing we had information that they would crave. Sorry folks. We had a plane to catch.

We made it to Calgary with time to spare and headed directly to the Thai restaurant I had scoped a few days before. My traveling companion promptly gave it two thumbs down so we went next door to the Indian restaurant. The buffet was closing in 15 minutes. Great. McDonald's anyone? We ended up having ribs at Tony Roma's, then headed to the airport right on time. As my friend waited for her plane, I gassed up and made a beeline for the border. I had 1,565 miles to get me from Calgary to San Diego. I figured I would do a leisurely 250 miles per day and arrive in San Diego for dinner on Friday, July 3rd. My first stop was Glacier National Park in Montana. I was excited about seeing the park until Ranger Smithette informed me that it would be $25 to pass through the gate and another $25 to set up camp. After camping for free throughout the Yukon that was a little tough to swallow. So instead of camping out, I was pretty much "camped out." They even wanted to charge me for firewood! This was more than I could bear, so instead of a liesurely 250 miles per day I planned to do about 600 miles per day and make it back to san Diego in time for the 4th of July festivities.

Back in Southern California with millions of my closest friends...

That just about closes the loop on one of the greatest adventures I have ever taken. I arrived in San Diego on Tuesday at precisely 4 PM on July 3rd. I'll miss the open road and the quiet solitude, but I squeezed everything out of this trip that I hoped for. I will never forget the support all of you gave to this endeavor - those that freely shared their upbeat comments, wit and natural history expertise, as well as those tracking the progress in the background. I hope you enjoyed the blog as much as I did. It was a great tool to chart the progress, sights and thoughts of the trip. I'm not saying this will be the last post, but it's time to get to work on the next project. McTavish is patiently waiting in the garage for his extreme makeover. As for Stella, after her award ceremony for the most dependable, toughest, 2-wheel drive, Arctic rock crusher I've ever had the pleasure to drive, she'll be taking a well deserved rest in Golden Hill. Thank you all again for being by my side in spirit for the last 6 weeks.
Posted by San Diego Westy at 8:08 AM 6 comments:

OK, Wasilla. And then what happened?