Have you ever done something at a birthday party that you regretted the next morning? How about 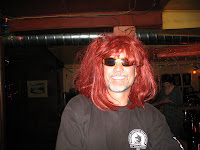 something at your own birthday party? Well, I’m happy to say, that except for the red wig and dark glasses, I never have. I celebrated my birthday in style with the help of some new friends from Dawson City. Actually new friends from The Snakepit in Dawson City, a famous “beer parlour” known for frequent brawls and the occasional cross dresser. Oh yeah, and Barnacle Bob will belt out tunes on the piano if the crowd begs him enough. A birthday to remember if I could only remember what happened.

There’s an old saying that comes from The Snakepit - “What happens at The Snakepit appears on YouTube the next day.” That being said I have no intention of sharing the one hundred or so additional photos of the evening’s antics on the Westy Blog. After being sincerely welcomed into the local group, it just doesn’t seem right. I will however be conducting private viewings for those interested.

I slept in on the morning after the festivities (see wig picture), and set off well after lunch time for the drive over the Top of the World Highway to Tok, Alaska. My reason for lingering in Dawson City, besides a hankering for a birthday steak, was to let the rain pass. From what I hear the drive over the TOTWH is spectacular on a clear day. I didn’t have a clear day. What was spectacular though, was surviving the mud and gravel road and numerous frost heaves that will literally lift your front wheels off the ground. That is if you’re going way too fast. Or as fast as Stella can go, which is pretty fast. Either way rubber left the road. It was still a beautiful drive, though. It cleared up during the last 50 miles and I eventually rolled into the Tok RV Park for a hot shower, laundry (non-hippie method), water and electric for Stella, along with a car wash, and free Wi-Fi. All for $25. What a deal!

Yes, it’s true! The first official Arctic Grayling was coaxed to the surface with a beautifully presented light gray mayfly imitation. It took standing waist deep in a 32 F crystal clear river until after 10 PM, but I am not complaining. It was magical. No pictures though. It was all I could do to keep myself dry, let alone my camera. I waded earlier in the evening to a gravel bar across the river. Uneventful. The return trip to my campsite? Eventful. I didn’t back track the exact same route and stepped into a hole. A deep hole. My waders took on about 2 gallons of ice cold water down each leg as I scrambled for footing. Fortunately the current bounced me off a conveniently placed boulder and I ended up getting my footing. I was frozen to the core but happy to have landed grayling number one.

Even with my high level of "proficiency" as a fly fisherman, I owe a lot of the credit to Jim in the adjoining campsite. I was pouring over my hundreds of flies realizing I didn’t have the one the grayling wanted. And with water as clear as this river you better be choosing carefully. Otherwise you’ll have nothing to show for the effort but a sore arm and waders full of cold water. Jim came sauntering through my campsite (I thought he was heading to the bathroom), and banged on my door. He must have seen my fly gear and asked how I did. I explained 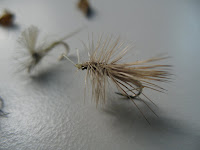 my plight and he proceeded to hand me about a half dozen flies that he said the grayling would love. I had none of these flies. Very cool. Here’s the not so cool part though. As we were talking his daughter Kate walked up with their yellow lab on a leash and proceeded to make herself at home (along with the wet-footed dog) in the Westy. Deep breath, Pete. Deep breath. Then I watched in horror as she stood on my mobile living room couch with her feet looking no better than the dog's asking if I slept up in the top bunk. On what freakin’ planet would this be OK?!? Deep breath. Remember, her Dad just handed you a half dozen flies that will allow you to slay the elusive grayling in great numbers. After cleaning the mud out of my bedroom, I headed for the river. Thanks to Jim I now have a total of one grayling under my belt.

Now on to Tangle Lakes. When I told Jim which way I was headed, he said he had just come from there. He told me of a turnoff that would take me 20 miles to an amazing spot he and his son fished a couple of days before. With arms waving enthusiastically he said, “If you want grayling, go to where the lake empties into a small river. They’re stacked up right at that point!” Generous Jim, who also gave me a hand drawn map that would have blown Lenora’s away, knows a lot about fly fishing. And he was absolutely right. I ate lunch at the edge of the lake and studied the water. After 20 minutes I knew where every single grayling was feeding. I tied on another of Jim’s recommendations and proceeded to slaughter grayling. It sounds worse than it is. I have a zero limit policy, so the barbless hook was gently removed from each of their mouths and they were set free. Too beautiful to eat.

The drive to see Sarah Palin in Wasilla...

drive from Glennallen to Wasilla was spectacular. I don't know what else I can say. Here's a picture that I hope is worth a thousand words. This is the Matanuska Glacier, the largest glacier accessible by car in Alaska. It was really an amazing view for 100 miles. Next stop after Wasilla (Speedy Glass windshield) is Homer, Alaska. I drove by Sarah's house, but there were way too many private property and no trespassing signs, so no pictures. The good news is I think you know what she looks like! After Homer I'm off to Seward, Valdez, Haines, Skagway and then back to Whitehorse in the Yukon to complete a very large circle. I'll keep trying to post pictures along the way!
Posted by San Diego Westy at 2:32 PM