Breaking news from the Yukon (almost)... 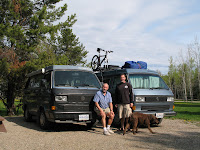 I met Richard, and his wife Ursula, on their own Northern Adventure. They’re traveling in Stella’s twin from Vancouver. I learned where they were from after Richard said, “we’re from the island.” Like an idiot I asked, “which island?” Naturally the discussion moved to Westy Talk. This is standard protocol for all Westy enthusiasts. I was pleased to see that he had the Michelin version of my Yokohamas. After a few minutes on the topics of our travel plans, reinforced sidewalls and Westy accessories, we wished each other safe travels. It was time, once again, for the rubber to meet the road. 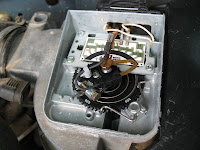 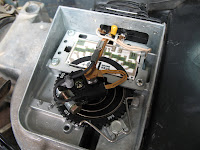 e has apparently been cured. Note the striking differences between the before and after photos. That is if you can tell which one is before and which one is after. I can't.

The bad news? The soldering gun I used to install the famous capacitor indirectly uncovered a weakness in my charging system.

A little background: I began noticing over the last week that the digital readout on Stella’s 1100 Watt power inverter never rose above 11.8 volts. The norm in San Diego was always 12.2 volts. You’re probably thinking, “So what? 0.4 volts? Get over it.” Well, I was thinking the exact same thing. I chocked it up to excessive IPod use, emergency radio charging, and nighttime laptop and lighting use. I figured it would jump right back up to 12.2 volts if I backed off on even one of those activities. Not to be. The issue turned out to be near catastrophic alternator failure. You could literally put your hand on it with the engine running and feel every moving part begging for mercy. Like I’ve always said, better here than in the Yukon. OK, I said it once. To myself. 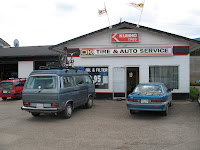 So here I sit in Smithers waiting for parts to arrive at OK Tire and Auto. But hey, I’m not complaining. Not even a little. Learning this in a town with a reasonable level of service available, as opposed to where I was headed next, is nothing short of damn lucky. Did I mention it was damn lucky?

So, where to next? Well, once John and the OK Crew get the alternator from Vancouver installed (best case May 28th), my original plan was to head to the Nisga’a Memorial Lava Bed Provincial Park. T 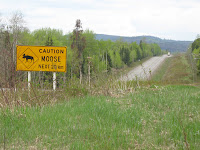 his particular area is known for numerous bear sightings. For those of you who haven’t given up on the oft promised amazing wildlife pictures, Nisga’a could be the answer. According to Kim from Thyee Lake, and a trucker I ran into while soldering Stella’s capacitor at a rest area, both have spotted the elusive Spirit Bear near the lava beds. The Spirit Bear, or Kermode Bear, is a sub-species of the American Black Bear and is known for 1/10 of its population having pure white coats. The goal is to capture a photo of a white Kermode Bear. You might be asking, “Who cares? That’s just like a polar bear.” Well, I haven’t seen any of those either! So far I’ve seen a chipmunk, a picture of a moose on a sign and a blue jay! I remain hopeful.

The inside scoop on what to see in northwestern B.C…

As I mentioned earlier, my original plan out of Smithers was to see Nisga’a, then continue north directly to Whitehorse in the Yukon. Wolfgang’s recommendations on northwestern B.C. quickly switched me to pl 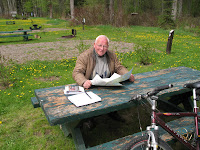 an B, which will temporarily postpone Kermode Bear "hunting." He stopped by my Riverside Park site while passing through on his motorcycle to inquire about Stella. He was kind enough to spend 90 minutes with me sharing his Canadian travel adventures, as well as some detailed direction on the must see sights in this part of B.C. One amazing tale spoke of how he and his buddy were swamped by a 2 meter tsunami while paddling through ice floes on their way to Petersburg, Alaska. Their kayak was overturned when a nearby glacier did a little unexpected shedding. They managed to salvage most of their gear, including their tools, repair the damage and continue on to Petersburg. Nothing like laughing in the face of adversity. Nicely done Wolfgang and thanks a million for the info on northwestern British Columbia. I would have missed 2/3 of your recommendations if we hadn’t spoken. Check back for pictures from Prince Rupert, Atlin, Kincolith, Hyder, Warm Bay, Kluane Lake, and more. The Yukon can wait!
Posted by San Diego Westy at 1:08 PM